For the weekly Zoom schedule, check out our new Upcoming Zoom meetings page.

Find out more about New Mexico’s COVID guidelines by clicking the link below to the NMDOH website.

Find out more about Eldorado’s many amenities, greenspaces and local information.

HAPPY NEW YEAR!  The Board of Directors Election process is beginning.  There are two (2) Director’s positions open for the 2022 election.  Each Director position is for a term of three (3) years ending May 5, 2025.  The Nomination Petition and all candidacy requirements and instructions can be downloaded here.  The completed and signed Petition and all required criteria are to be submitted to the ECIA office no later than 5:00 PM, March 1, 2022.

Changes in obtaining signatures for the Petition have been put in place.  A proposed Candidate may now obtain signatures in one of two ways:  1) Lot owners may sign the Petition in person.  A physical signature on the Petition must still be accompanied by a legibly printed name and Eldorado mailing address or 2) Lot owners may send their nomination support via an email to the proposed Candidate.  The email must contain: name, Eldorado mailing address, date, and a statement of support. (e.g. “I Jane Doe, support the candidacy of Mack Smithy for the 2022 ECIA Board of Directors election”).  If an email nomination is submitted in lieu of a physical signature, each individually supporting email must be printed and attached to the Petition. Only one signature per Lot will be counted in determining whether the valid signature requirement is met.  A Lot Owner may sign the Petition of more than one proposed Candidate. Owners of multiple Lots may sign a Petition equal to the number of lots they own.

Proposed Candidates must be a Lot Owner of record and a Member in Good Standing (2022 assessment has been paid in full and have been received and credited to the Association’s financial account by 5:00 PM, March 1) whose rights and privileges are not suspended and who resides full-time in Eldorado.

Each proposed Candidate must present a Nomination Petition to the ECIA Office which contains at least twenty-five (25) physical signatures or attached email nominations that are valid. To be valid, a signature must be of a Lot Owner of record whose 2021 assessments are paid in full as of the date they sign the Petition and whose rights and privileges are not suspended as of the date of signature.  It is recommended that more than 25 signatures be obtained in case some signatures are not valid.

Remember to be able to vote and support the candidate of your choice, your 2022 assessment must be paid in full and have been received and credited to the Association’s financial account by 5:00 PM, March 1. 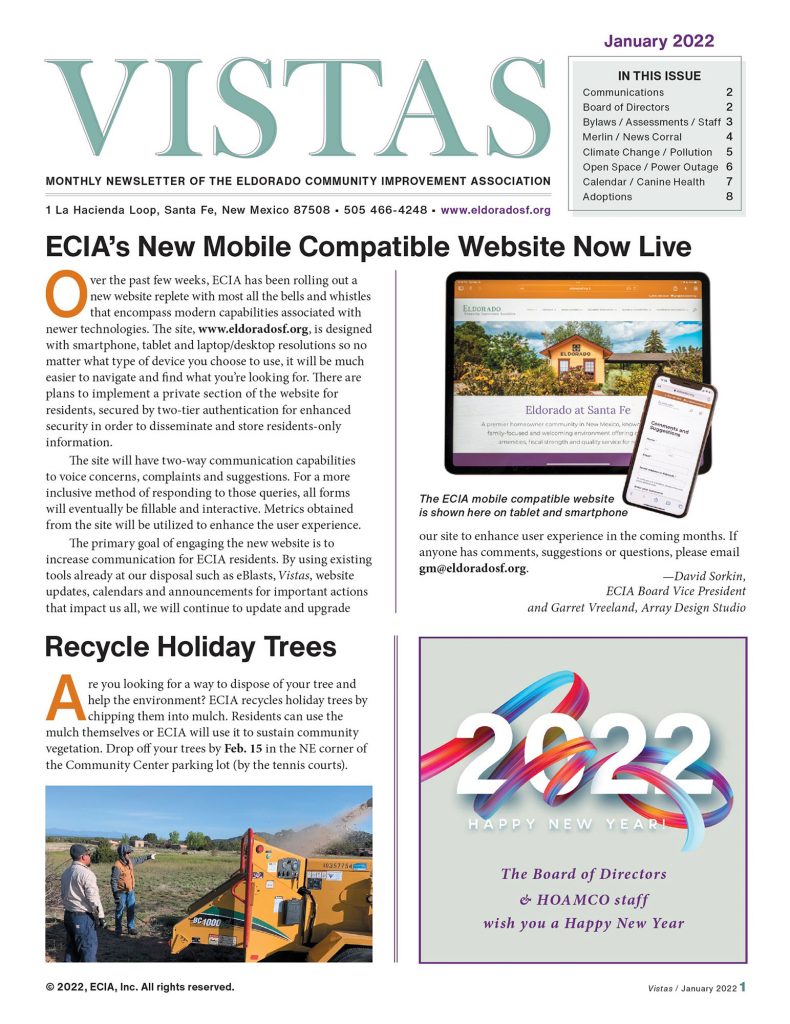 Get the latest issue of Vistas!

Another fabulous issue of the Vistas newsletter is now available. View or download by clicking this link!

We want to hear from you.  Please submit articles, ideas, artwork or suggestions to: articles@eldoradosf.org